Pine wood nematode (PWN), Bursaphelenchus xylophilus, is correctly regarded as a major threat to European forests, particularly following its establishment in Portugal and the fact that, even with the application of stringent measures, the pest has continued to spread and kill pine trees in that country. The basis for classifying PWN as a highly significant threat is well documented and its track record of killing pine trees in:

In all countries where wilt expression has been recorded (leading to the description of the syndrome pine wilt disease) there has been extensive tree mortality. For example, in Japan annual losses peaked at 2.5 million m3 in the early 1980s but appear to be fluctuating around an average of about 1.0 million m3 to the present time.

The recent outbreak in Portugal illustrates the high costs of attempting eradication of a newly discovered organism (approximately €80million from 1999 – 2009 - source EU DG SANCO), but the direct losses from tree mortality must also be added to this amount. The campaign to eradicate the isolated finding of PWN in Spain has also incurred high management costs, of nearly €3m in 2010 (EU DG SANCO).

Faced with this evidence of direct and indirect financial effects, when combined with the environmental and social impacts, there is an urgent need to develop the most effective pest management strategies to deal both with established outbreaks and, particularly, for early detection and eradication of incipient infestations. Considerable progress has been made in understanding the relationships between PWN, its vector insects and the host tree / environmental factors that result in pine wilt in all affected countries but, especially, in Portugal.

Apart from research and management initiated within Portugal directly, the EU Framework Programme 5 project PHRAME, addressed a number of important issues on B. xylophilus, its vectors in the genus Monochamus and the factors leading to wilt expression and tree mortality. In developing the concept for the current project, the knowledge gained in PHRAME and through other research efforts internationally has been brought together to address the key interactions between the four main elements that determine risks from PWN namely:

• The nematode
• Its vectors
• The host tree
• The immediate eco-climatic environment.

The figure below, distinguishes between the ways in which the vector beetles in the genus Monochamus transmit nematodes to either living trees (maturation feeding) or dying/dead trees (oviposition). 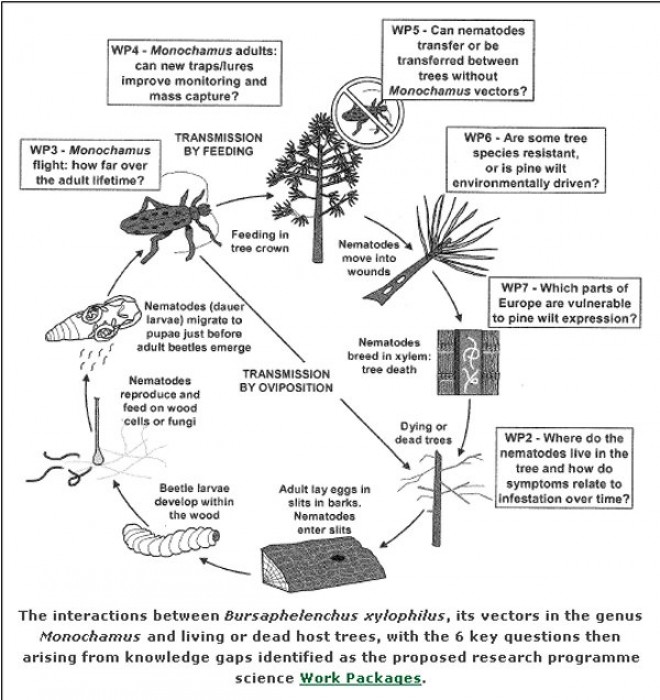 As virtually all conifer hosts (with the exception of the genera Thuja and Taxus) are suitable for the saprophytic (delivered by oviposition) phase of the nematode cycle, the availability of suitable host trees in Europe could be significantly extended. The expression of pine wilt, leading to tree mortality, is a phenomenon that is only noted under particular combinations of susceptible tree species and eco-climatic conditions, principally high temperatures and low soil moisture contents. The precise conditions leading to pathological impacts from PWN are not fully understood, although some of the factors have been elucidated so this project hopes to provide solutions in an easily understood format.