Calculate your risk of PWN infection

Focusing on the vector to control pine wilt disease 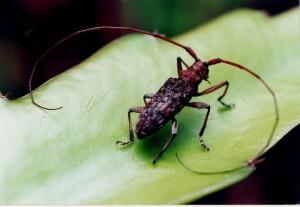 Survival of B. xylophilus in the natural environment is dependent on association with longhorn beetle vectors in the genus Monochamus. Without the vector, the nematode would be unable to move from tree to tree and would eventually decline to minimal or zero levels within a given tree host.

Focus has, therefore, been on the role of the vector in the transmission of PWN between trees either into living potential hosts or into weakened or recently dead trees.

In addition to this emphasis on the natural transmission pathway, research has also been carried out on the potential role of non-vector, human-assisted, transmission directly from infested wood into new hosts.